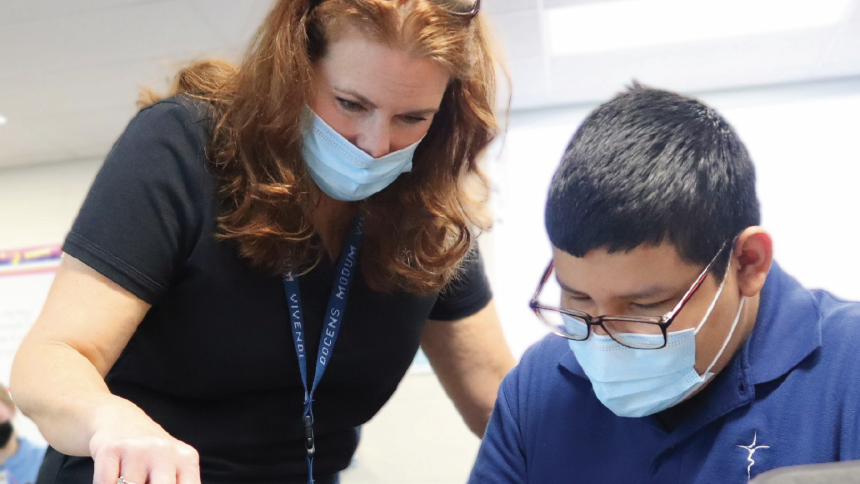 It is not hard to forget how it all started. On March 13, 2020, Lansing Catholic students and staff were told to pack up their things and go home.

“We decided that on that Monday we would have no school, meet with all the teachers, and say, ‘okay, here’s our plan to do online,’” said then-principal Doug Moore.

The original plan was to do virtual learning for two weeks—basically, an extended spring break. But things took a turn when that break was extended to months, then the rest of the year.

“I was super excited at first, but after those two weeks, it just kept extending and extending and it got rough,” said senior Bo Poljan.

Poljan agrees the long-term repetitiveness of online learning took a toll on both students and teachers. For a short time, our school’s teachers became students themselves as they worked to determine how they would teach students in a new digital environment.

“It was rough, I’m sure it was,” Moore said. “But we tried to keep it as simple as possible, asking simply, ‘what are the main objectives of your course? What are the main points that you want students to get? How can you really just zero in on that stuff?’”

Lansing Catholic educators came up with many ideas on their own, from video lectures to zoom breakout rooms.

“It took 32 hours to upload that video.” Pohl said. “I was thinking, ‘How in the world am I going to teach six subjects, creating and uploading video lectures every single day?’”

The students had a hard time adapting to a new routine with a professional and orderly mindset. It was hard to act as if school was still in session when those sessions where happening at home.

“I was a terrible online student,” Poljan said. “I wouldn’t do a single thing at home.”

Poljan wasn’t alone. Data show the class of 2022 had ACT scores that were 4.5 percent lower than the class of 2021, which took the ACT in 2020 before the pandemic hit. It was not only in standardized test scores. Classwork and at-home assignments showed overall declines during the time period when students were learning online, a factor that would play into school decisions later on.

“Most students were not thriving online,” said LCHS president Dominic Iocco, who joined the school in 2020. “All the data we were seeing showed our students were falling way behind.”

Those changes in the academic part of students’ lives did not go unnoticed by teachers. In order to make it easier for the students, LCHS team members were happy to take extra steps to ensure healthy, effective spaces for students to learn and grow.

“I made a lot of house calls,” Moore said. “When students’ Chromebooks didn’t work, I literally drove to their house and either brought them a spare or fixed their own.”

Although many LCHS students had experienced e-learning on snow days, there were many surprising changes when online study became the norm.

“I think that everyone had different—and sometimes unexpected—responsibilities at home,” said Pohl. “Caring for a one or more younger siblings. Helping around the house in different ways. Our students were experiencing many challenges in addition to adapting to online learning.”

And although academics are a vital pillar in the Lansing Catholic mission statement, the social and emotional part of each student’s formative foundation was damaged as well.

“Normal daily routines and face-to-face communications—things we all take for granted—were lost,” Pohl said. “Being able to rely on a friend or even unload and help share the burdens with each other...all of that disappeared overnight.”

Throughout all of the hard times, Lansing Catholic did what they could to affirm families and teachers who were putting in hard work to make the transition into remote learning as smooth as possible.

And it went beyond academics and technical support. Lansing Catholic reached out to its K–8 partner schools to help make sure students were receiving the basic supports they needed. Each week, LCHS staff distributed meals to approximately 60 area families.

Lansing Catholic administrators also paid teachers a visit to say thank you for their dedication to teaching and keeping the students happy and healthy.

“We made up fruit baskets and took them to each teacher’s home,” Moore said. “We got popcorn from Horrocks, and took that to them saying, ‘Hey we appreciate you, thank you for everything you’re doing.’”

As the 2020 school year ended, many thought the possibility of any kind of normalcy was lost. All across mid-Michigan, other schools were making the difficult decision to continue learning remotely as the 2020–2021 school year approached.

But not Lansing Catholic. The school returned to in-person learning in August 2020, with many additional safety measures in place.

A Sharp Change in Direction

“Ultimately I made that decision,” Iocco said. “At the time, it was about what best serves the mission and how can we best serve our students. It was clear that in person was a much better option.”

It was a decision that paid off. By returning soon before many other schools, the academic and emotional performance of LCHS students did a 180 degree turn around for the better.

The school’s ACT results, while lower than before the pandemic, still compare very favorably to the national average and to other districts which remained online for longer. GPAs and other measures showed similar levels of stability over time.

“Our partner schools were off the charts for academic performance compared to everyone else who was still learning online,” said Iocco.

Students were excited to walk through the school doors after the summer break, a response not usually seen by schools.

“I can pay more attention in school than I could through a zoom call,” Poljan said. “There are so many distractions. But when you’re there physically I feel like it’s a lot better.”

Teachers, after waiting and planning for any circumstance, were relieved and joyed to come back. Personal connection—a crucial part of learning—was being built up again.

“To come back was exciting,” Pohl said. “It was good to be there to answer student questions, to see their faces, to be in relationship again.”

It may have been a hard choice to make to come back before other schools, but it was a choice that benefited the community in and out of the school.

“I think our students are in a much better place than a lot of the public schools in our area,” Iocco said. “Both from a health perspective and from an academic perspective, we’re back on track that much sooner, and that’s better for everyone in the entire LCHS family. Looking back, it was the right call.”

As LCHS officials review their decisions throughout the last 24 months, there are some decisions that seem clearer in hindsight.

“We were dealing with information we had and you know it made sense at the time, but as we learn more, it has become clear we should have never shut down schools,” Iocco now says. “For many students, it was more disruptive and detrimental than any other solution might have been.”

Indeed, as ‘two weeks to flatten the curve’—the state’s messaging at the time—turned into months of closure, opinions grew more and more divided about school closures.

But at the end of the day, Lansing Catholic had to take action to execute its mission in ways that made sense for its community of learners, educators and families.

And they chose to continue teaching a way of life, in person, at a whiteboard. They chose to teach in a way that formed students spiritually, intellectually, and socially into faithful disciples of Jesus Christ.

“It’s who we are,” Iocco said. “And we are incredibly fortunate to have the freedom and resources we need to create that authentic experience for our entire community.”