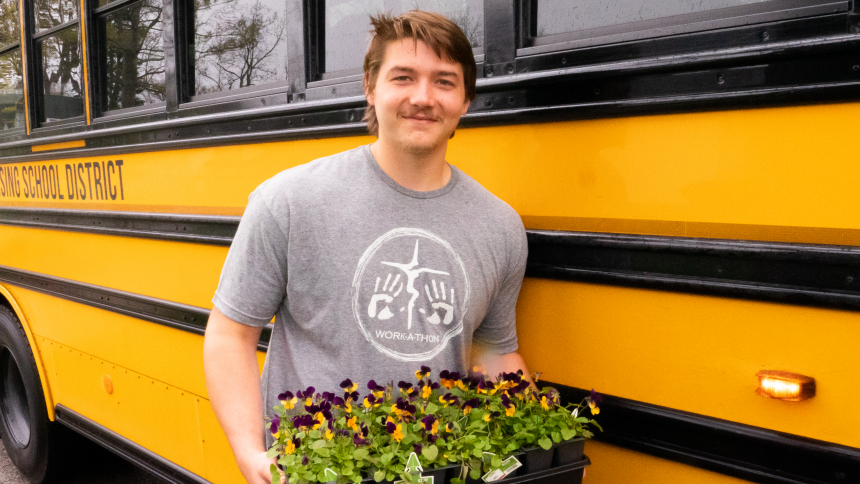 For the LCHS class of 2022, the past four years have been anything but normal. Masks, distance, and frequent interruptions have transformed their experiences from the ordinary to the momentous.

These changes have impacted students in countless different ways, both large and small. But for Bo Poljan, there was only one way to approach it.

“You’ve got to just put your head down, keep going,” Poljan says.

It’s a familiar strategy for the 6’4”, 250-pound offensive and defensive tackle on Lansing Catholic’s football team. It’s how he’s learned to block the opposition and advance on the field. It’s also how he works through his toughest classes, meets adversity, and shares his strength with others.

In the fall, Poljan will head up to Northern Michigan University to play offensive guard and study industrial technologies.

“I had a few other offers to play football, but I picked the one place that I felt would be most enjoyable for me during the next four to five years. I love the outdoors and I can do stuff that I love up there year-round,” he says. “Then, when I’m done with college, I want to work with big robots and CNC [computer numerical control] machining, stuff like that.”

Poljan credits Lansing Catholic with pushing him to become the man he is today.

“I think the school has done a good job of making me a better person,” he says. “The people here have helped me grow, from being a naive freshman or whatever, to being very self-aware, knowing how to work through problems and stuff like that and not just kind of stopping when things got hard. Lansing Catholic has helped me do that, to become that person.”

As an example of his growth trajectory, Poljan points to his recent experiences with pre-calculus.

“Last year I took pre-calc, which is kind of a senior class, and after that I was encouraged by my parents and some other teachers to take calculus this year, even though I wasn’t that good at it,” he says. “But they encouraged me to take it just so I can challenge myself and not kind of coast through senior year. That’s one of many examples of the way Lansing Catholic has caused me to think beyond the immediate moment and really work to better myself.”

For Poljan, it would have been easy to coast. He could have focused on sports, been content to be a popular student, perhaps just gotten by on minimal effort.

Instead, he has chosen differently. He’s not a stereotypical jock—not by a mile.

“I don’t mind philosophy. I like geography,” he says of his studies. “Anything social sciences and like that where you can engage in conversation, I like that. Sometimes people look at me and they think stubborn, but I’m actually very open to conversation and I don’t like to be very one-sided on anything. I like to see all sides.”

Poljan also takes time to simply be, to think, to examine himself and his own ideas. Adults on a recent mission trip saw him just sitting in the sun, enjoying the opportunity to reflect.

“I know my time at this school is ending, and I want to soak it in,” he says. “It’s so small and tight knit here, and I’m going to miss it. I know I can’t stay forever, but it’s hard to leave a place that’s been so good to me.”

When Poljan looks ahead, however, he does so with the same grit and determination that have characterized his participation in Lansing Catholic football.

“So there was this old coach, his name was Lou Boyer and he was there when my brothers were there, with Coach Ahern. He would always say, ‘You can do all the preparing that you need to, you can study film, all that, everything that you can possibly do. But at the end of the day you just got to go out there and kick someone’s backside,” Poljan says. “And that... And I feel that’s the way you’ve got to look at life. I mean, you can prepare all you want to, but you got to go and do it. At the end of the day, you’re not... even if you study for all this, you have to have the courage to do what you need to do.”

And Poljan, who is one of the many brave, well-prepared students Lansing Catholic has produced in the class of 2022, is ready to go do just that.