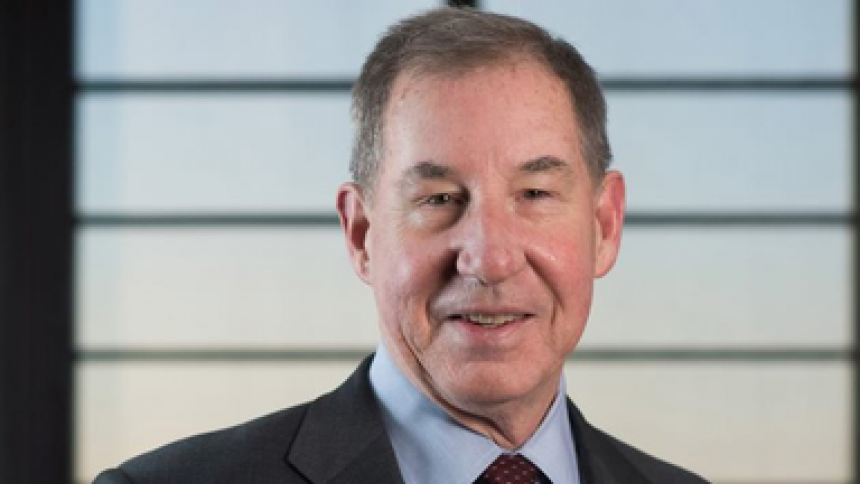 A solid Catholic education, good fortune and a strong family upbringing served as the foundation for Mark Murray C72 in his professional life. He recently retired from an extraordinary career—CEO of Meijer, president of Grand Valley State University, state treasurer, budget director, and activist who helped shaped Michigan’s policies and economy for the past 35 years.

With credentials like these, a little swagger would be in order, but not for Mark. For him, his achievements were the incidental outcomes of a resolve to do his best, having great colleagues and bosses, and a commitment to do good in whatever situation he was in. The result was that his work has been recognized and appreciated by others, and that matters the most to him.

“I’m not sure I can think of anything that was important or had a real impact that wasn’t a group effort,” Murray says. “I have tried to bring good prudence and judgment into my work for the good of the endeavor. I really don’t think I ever accomplished anything on my own. I was always in settings where I was working with many other good people.”

It’s Murray’s humility and old-fashioned sense of service that have made him respected among his peers. His LinkedIn profile is remarkably simple; his Wikipedia entry references him only as an “administrator.” For those who know him, however, there is a tone of understatement.

These characteristics—along with many others—find their roots in his strong Catholic faith.

“The moral and ethical code I was taught—first by my parents, and then by my teachers at St. Thomas Aquinas and Lansing Catholic—turned out to be very powerful and helpful to me,” Murray says. “It took some time for it to gel for me. I had my share of stumbles along the way, but now I can say that the Catholic faith is an essential element of my life and the life of our family.”

Murray notes that his Lansing Catholic experiences were very different than those of today’s students.

“I was a student during the merger of Gabriels and O’Rafferty,” Murray says. “There were something like 1,200 students trying to work and learn in the same building that’s in use today. It was pretty chaotic. Fortunately, I had some great educators and coaches—Sister Pat Brady, Tony Ries, Paul Cook, Brother Kevin and many others—who were able to cut through the chaos and teach me to think, to write, and to reflect about how I live out my Christian obligations in a community setting with others.

“Lansing Catholic was rigorous academically while expecting me to probe who I was called to be as a person. High school years are critically important to set a compass for a life of integrity and purpose. It wasn’t always smooth for me, but I’m very grateful for what those good teachers tried to do for me.”

Murray’s own journey has been shaped by the virtues he holds most dear.

“Justice helps every person and every organization flourish,” he says. “Having integrity, living by a code of truthfulness, treating people with respect, that is how we flourish in our common life. And there’s no question that the bones of that came up out of being raised in the Catholic Church.”

Perhaps that is why, rather than ticking off a list of achievements and pointing to his past successes, Murray’s observations are deeper, more human.

“I have always known that the project was to tell the truth and do what’s right and treat people well. I can’t say I did it perfectly all the time, but I certainly knew when I was coming up short and knew it was time to get better at it,” he says. “The moral and ethical code I was given turned out to be very powerful and important to me, as it is to many, many other people of faith.”

Murray’s commitment to contribute to the world around him remains strong in retirement. He continues to serve on several corporate boards and contributes his time to other nonprofit and charitable organizations. Even though he now lives in the Grand Rapids area, he continues to give to Lansing Catholic.

“I hope that the school will always be there for folks in Lansing,” Murray says. “Too many families struggle to afford tuition, so we are happy to help out.”

Indeed, it is this simple approach to doing good and focusing on what’s right—attributes shaped by his early faith formation— that seems to keep Murray grounded in what matters most.

“The thing that pleases me the most at this point in my life, and I expect will please me through the rest of my life, is our family,” Murray says. “And again, I don’t take credit for that. I have been so richly blessed by Elizabeth C72, my brother, Fr. Mike Murray G68, and my children.”