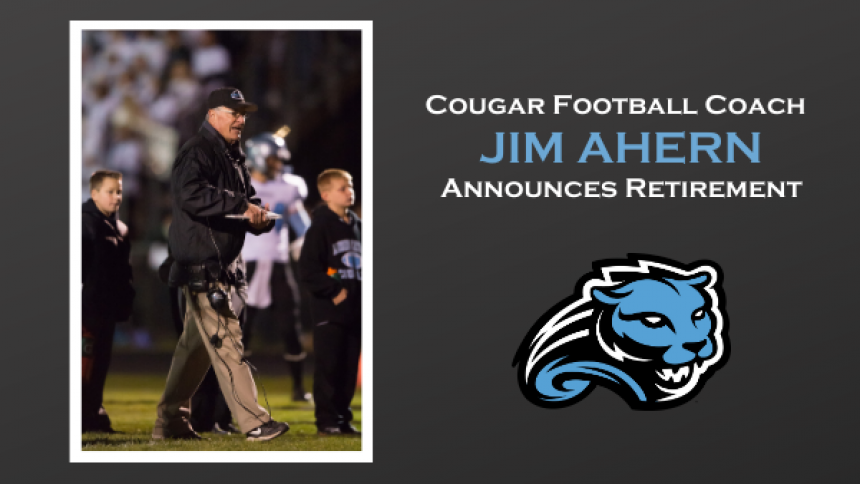 During his 12 seasons at Lansing Catholic, Ahern led the Cougars to four league titles, five district titles, five regional titles, qualified for the playoffs all 12 years, including three trips to the state finals and winning the 2019 state championship.  Even more impressively, Ahern’s teams earned Academic All-State honors 11 times.  Ahern culminated a 112-31 record at LCHS, bringing his career record to 309-155-6, tying for 8th place in career victories in the state of Michigan.

“As a football coach, Jim Ahern is exceptional,” stated Lansing Catholic athletic director, Brian Wolcott, “His faith is at the core of all that he does and it permeated his work with our young men as he helped them grow as athletes and more importantly as disciples of Christ. He inspired us, is a great role model and will be sorely missed at Lansing Catholic.”

Ahern leaves a lasting legacy of accolades in Michigan football including being inducted into the Michigan Football Coaches Association Hall of Fame in 1996, earning the Detroit Lions Coach of the Year and the Detroit Free Press All State Dream Team Coach of the Year in 2019, and numerous coach of the year awards at the district and regional level.

“God definitely has a plan for us. I was very fortunate, that at a difficult time in my life, I was hired at Lansing Catholic.  It has been an important part of my life both physically, mentally, and spiritually,” said Ahern.  “The support that I have received from the administration, my assistant coaches, the parents, and the students has been amazing. I have been fortunate to have players that gave everything that was asked of them.  It is with mixed emotions that I am retiring; but I feel that it is time.  I want to thank everyone that made these past 12 years a special part of my life.”

In his new downtime, Ahern is excited to spend more time with his family, including watching his grandson play as quarterback for his senior season at Rockford High School next fall.