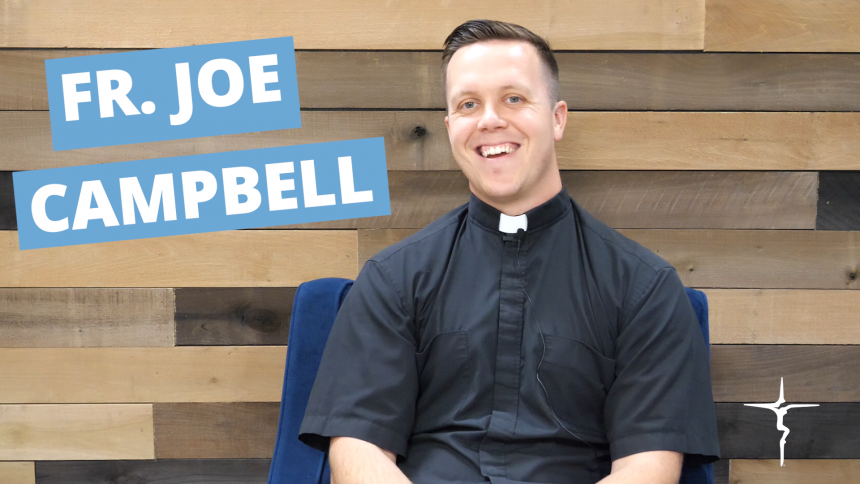 Back to School Message from Fr. Joe

Read below to learn both a bit more about our new Chaplain Fr. Joe Campbell and some fun facts about Mary and the month of August.

My name is Fr. Joe Campbell. I’m the new chaplain at Lansing Catholic. I’m the 9th of 10 kids and was born and raised just outside of Ann Arbor. I was homeschooled from kindergarten through high school, so only as an adult have I been involved in Catholic education. I attended St. John Vianney College Seminary in St. Paul, Minnesota from 2009-2013 and Sacred Heart Major Seminary in Detroit from 2013-2017. I was ordained a priest in June of 2017 and served as the Parochial Vicar (associate pastor) at St. Patrick in Brighton for the last four years. I started as chaplain here on July 1st, but so far the hallways here have been pretty quiet. I’m excited for the school year to start so I can meet all of you!

Since the month of August is traditionally dedicated to the Immaculate Heart of Mary, this is a great time to start praying to our Lady for our school community. Our school Patron Saint, John Paul II, also had a strong devotion to Mary. After his own mother died when he was a boy, he said to Mary in prayer, “Now you will be my mother!” John Paul II popularized the St. Louis de Montfort 33-day consecration to Jesus through Mary--now a common Catholic devotion throughout the world. The blue shield and letter “M” in his coat of arms was also in honor of Mary.

On May 13th, 1981, an assassin hired by the Soviet Union shot Pope John Paul II as he passed by in his motorcade in St. Peter’s square in Rome. His wounds were so severe that the Holy Father remained in the hospital for three months to recover. Throughout this ordeal, John Paul II prayed continuously to Mary and he attributes his survival to her intercession. One year later to the day, John Paul II traveled to Fatima, Portugal to place one of the bullets from his wounds in the crown of the statue of Our Lady of Fatima where it still rests to this day.

On Aug 15th every year, we celebrate the Solemnity of the Assumption of Mary into Heaven. This is such a big feast that it is always a Holy Day of Obligation. As the last few weeks of summer come to a close, let's join in prayer with our Lady every day for our school. Whether that’s just one Hail Mary a day or a rosary, every prayer counts. Please pray for me, all the staff and faculty, and all the students, that Mary may wrap her mantle of protection over our school and that we all may be open and attentive to all the graces that God wants to give to us this year.