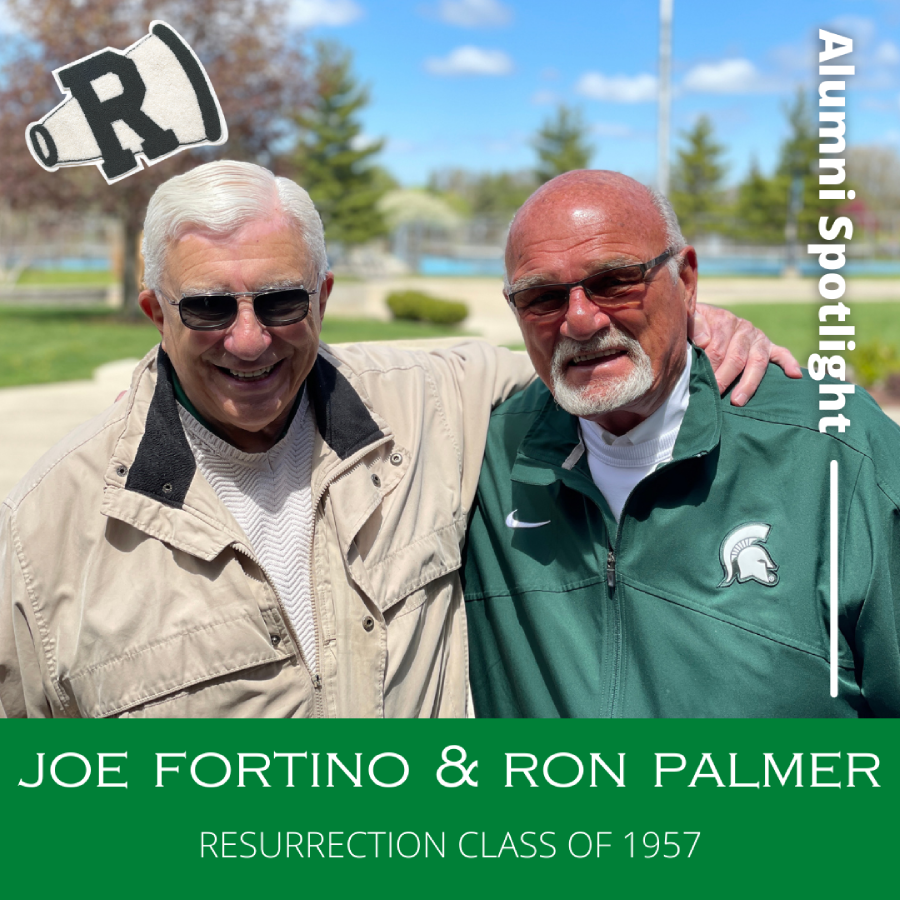 This month we caught up with two members of the Class of 57 from Resurrection: Joe Fortino and Ron Palmer. They were good enough to sit down and share some of their thoughts about their time at Resurrection and what they've been doing since. Joe and Ron have been friends since the third grade and have been neighbors for over forty years. The banter between them is obvious that they have had a lifelong friendship.

What have you been doing since graduation?

Joe: I started dating Joanne Szedlak a few years after high school and really got to know her more through the Catholic Alumni Bowling League and later married. I was going to college while she worked for Oldsmobile when she was pregnant with our first of eight children. She was making a man's salary but was not hired back after she had our first child so I had to focus on making money more than school. I started peddling pies, thanks to Ron, but then had to get a better job and was a milkman for six years with Heatherwood Farms until I took a job with Schafer Bakery off of Logan. I worked there for thirty-seven years. Family was and is everything to me. (Joe's wife, Joanne, passed away last year and it is obvious he still feels it deeply.)

Ron: I married Anita Spagnuolo from St. Mary's at eighteen and helped with coaching the freshmen at Resurrection. I took a few community college classes but I was done with school. I held lots of jobs in sales finally spending most of my time in the trucking industry. Anita and I raised three children and spent our time focused on family and friends. Before the pandemic we used to have a weekly breakfast with classmates as well as an annual get together. The pandemic interrupted all that but we're hoping to get back to that again soon.

What is your fondest memory of your time at Resurrection as a student?

Joe: There are so many great memories, it is hard to pick just one. I really enjoyed making the floats. We had a close class and it seemed like all the kids participated.

Ron: Friday nights. After every game -- football and basketball -- there were dances, parties, or socials. Everyone was invited.

What activities were you involved in as a student?

Joe: basketball, operettas. I didn't sing well. Ron had a great voice and I didn't realize until a few years ago that Ron wasn't in the operetta.

Ron: football. I was going to be in the operetta, Pirates of Penzance, but the costume wouldn't fit. Sr. Gilbert's sewing class even tried to alter it. Ursula Klein kept saying I was going to be in it but I wouldn't do it without pants that fit. She was a saint, the greatest music teacher in the city of Lansing.

Joe: She was a saint.

What staff person/teacher inspired you, and how?

Ron: Monsignor John Gabriels was a savior to me. He helped me get through high school and had his own way of doing things. (Both Ron and Joe started sharing altar boy stories and how each priest was different.)

Ron & Joe: When Paul Cook came on staff it changed our school. We started winning against St. Mary's. He taught history, coached and became the athletic director. And was tough, trying to teach us through athletics and the classroom what life was really about. He emphasized discipline and hard work. People didn't goof off with him out of respect because everyone could see the results from the hard work and his high expectations.

How did your time and experiences at Resurrection prepare you for your life or work?

Both: Discipline from Paul Cook helped us in work, especially persevering when things were tough. We gave back by coaching at Resurrection after high school.

The friendships from then have lasted a lifetime. We've been neighbors for over forty years. We've taken family vacations together, went to drive-in movies with our wives, and did things with our kids. We created our own little PF (Palmer-Fortino) Country Club where we set up a little mini-golf course, we (Palmer's) had a pool where all the kids learned to swim and Joe had a hoop for kids to play basketball. We even loaded up the station wagon one year with most of our kids and some neighbor kids and the two us took the whole lot to Cedar Point.

What made Resurrection unique among high schools while you attended?

Joe: It was on the blue collar side of town. We were just the common people...

Editor's Note: These two Shamrocks had a great perspective on things, recognizing that they were part of the luckiest generation being raised by the greatest generation. They grew up in a time between wars, and, according to them had the best music and movie stars. They miss those days so much. Time goes by too fast.

They also recognized that while they felt like they had a close class, not everyone participated. Over sixty years later, they still feel some remorse about not reaching out to others more beyond their usual circle of friends. We are never too old to forge friendships.

To see previous Alumni Spotlight's, click on the tag below.