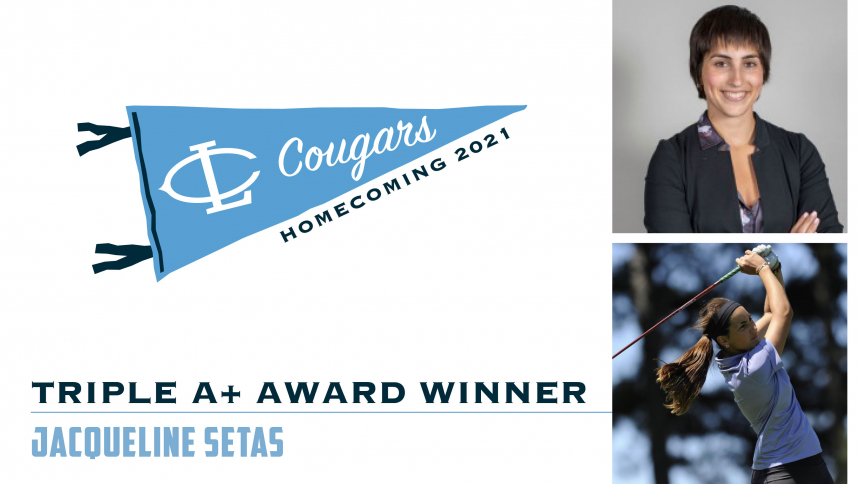 Lansing Catholic High School is pleased to announce 2014 graduate and golfer Jacqueline Setas as the recipient of this year’s Triple A+ Award.

“We are extraordinarily proud to honor Jacqueline with our highest athletic honor for alumni,” said Alumni Director Doug Moore. “Her personal, academic, and professional achievements rank her highly among our most distinguished graduates—truly, she is a phenomenal human being and a credit to our institution.”

Setas continues to hold school records for lowest nine-hole score (30) and 18-hole score (68). Her other athletic achievements while at LCHS include numerous individual and team honors including:

Jacqueline also was LCHS 2014 Athlete of the Year, won the 2013 Michigan Division 4 Lower Peninsula state championship.  As a collegiate athlete, Jacqueline played golf during her career at Michigan State making the Academic All-Big Ten Team for four years, and earned the Distinguished Scholar Award in May 2019 graduating from the Eli Broad College of Business at MSU.

In 2017 she was diagnosed with Stage II Hodgkin’s Lymphoma and battled cancer as if it were a golf match, one stroke at a time.

“As of July 2018, she has been declared cancer-free,” Moore said. “Today, she leverages her faith, family, and friends as she gives back to others facing cancer.”

In August, Setas placed first at the Mid-Amateur Qualifier at Flora Country Club in Illinois and will compete in this year’s US Women’s Mid-Amateur Championship September 25-26.

Jacqueline is currently the Digital Advertising Coordinator at Acadia Health Care in Nashville, Tennessee. She is the daughter of Jim and Susan Setas of East Lansing. Her brothers, Adam (2009) and Ben (2007) are also Lansing Catholic alumni.

The annual Triple A+ Award is given to an LCHS alum who has excelled academically both in high school and college, has been recognized for outstanding achievement in athletics while a student at Lansing Catholic, participated in a Varsity sport for at least two years at the collegiate level, and has achieved a level of success in their chosen career. This award was first presented in 1995 and was initiated by the Lansing Catholic Cougar Club. Submit your nominee to alumni@lansingcatholic.org.